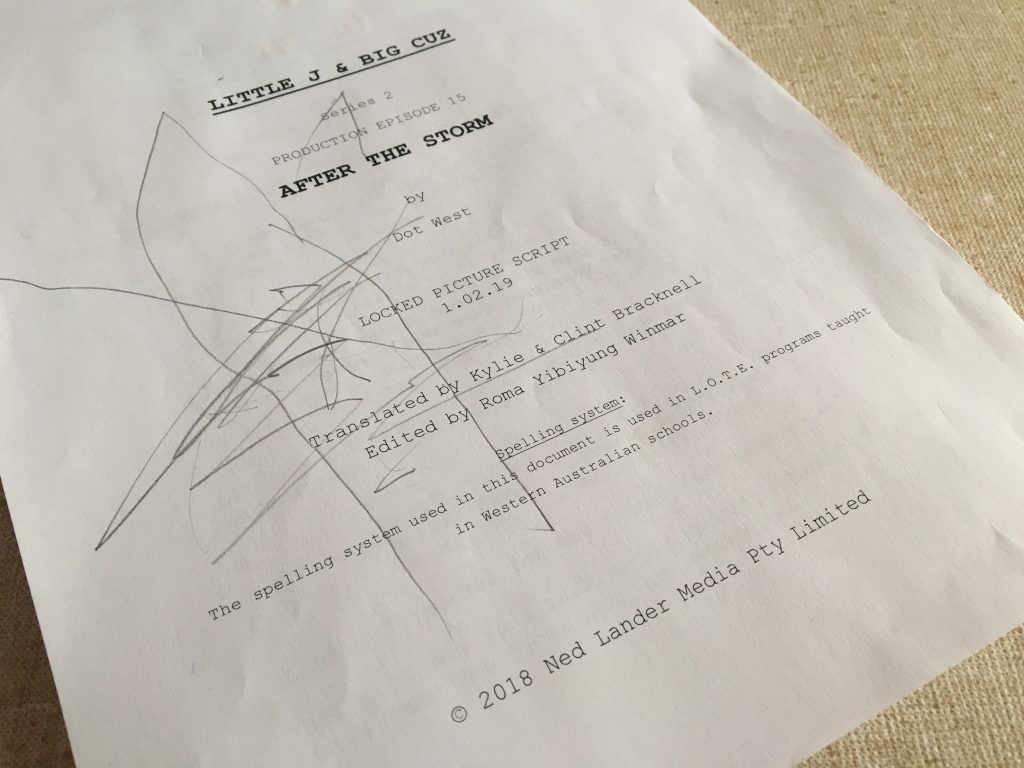 Where the story began

In November 2015 I auditioned for a lead role in the ground-breaking animated children’s series Little J & Big Cuz, produced by Ned Lander and directed and designed by Tony Thorne. Three months later, I received news that I hadn’t secured a lead role – Miranda Tapsell and Deborah Mailman were locked in – but I would be strongly considered for a guest role or bit part. Two months later, I was offered the role of five-year-old ‘Ally’, one of Little J’s school friends. She is very open and direct, and idolises her father Mick, voiced by Mark Coles Smith. In April 2016, I accepted the offer and recorded Ally’s dialogue for three episodes in the first series, ‘New Tricks’ by Erica Glynn, ‘Nothing Scares Me’ by Dot West and ‘Where’s Aaron?’ by Erica Glynn & Clare Madsen. It was an awesome voice recording experience – directed by Bec Cole – and sparked my interest to do more.

The scripts for each Little J & Big Cuz episode are superbly written. Considering my desire to become more of a writer for children in my own language, I was curious as to how one writes for a show like this. Post-record for series one and fresh out of the booth, I sparked up an earnest conversation with producer Ned Lander, asking him if he might consider having an episode or two revoiced in Noongar language. He was keen to add Noongar to the list of languages this show would be translated into. Two years later in mid 2018, pre-production discussions began with Liz O’Dea from Media World Pictures for Old Dog Pictures.

For the past two decades I have been learning Noongar language directly from experienced speakers – mostly close family members. However, over the past ten years 90% of those particular speakers have died. I miss hearing them speak language to each other on a daily basis and wonder about the longevity of Noongar as a spoken language. How many of we thirty thousand Noongar people still speak with each other fluently in our mother tongue on a daily basis? Our children are starved of conversational Noongar, having very limited access to speakers and resources. In order to lift our language up and out of endangerment-status, it’s imperative we increase the number of speakers within our community.

Lander mentioned he was a fan of Waabiny Time, as am I. In fact, I had so much fun hosting the early childhood television program on NITV – working with L’unica Productions – that I approached its producer Cath Trimboli to produce the Noongar versions of Little J & Big Cuz with me. I then asked star researcher and Wirlomin songman, Dr Clint Bracknell, to assist me with the interpretive translations – we’re married, how could he say no! I was honoured that NAIDOC Perth’s 2019 Elder of the Year, Roma ‘Yibiyung’ Winmar, agreed to assess our translating efforts and edit them like any honest Noongar would – ruthlessly and with heart. I was thrilled everyone excitedly agreed to collaborate. What a team!

The task at hand

Clint and I worked tirelessly, translating two episodes from series two of the Logie-award-winning series. Both of these episodes were written by Dot West, who is also from Noongar country. Cath and I, both full time mums of sons under four years of age, scheduled and held auditions at Kurongkurl Katitjin ECU, arranged recording dates with Siamese and Cue Sound and planned production logistics. Maam-yok Yibiyung dedicated two full days to editing sixty-six pages of dialogue, thirty-three pages per episode. Casting was soon locked off and in June 2019 we wrapped the monumental recording of Little J & Big Cuz in Noongar language. Character voice acting in your endangered mother tongue when it isn’t your first language – while striving to match locked video footage – is really hard work. As Director, I pushed to get every section of dialogue as smoothly aligned to the character movements as possible. Our passionate team of performers included Della Rae Morrison (Big Cuz), Tjiirdm McGuire (Levi), Kyle J Morrison (Uncle Mick), Irma Woods (Sissy), and Karla Hart (Ally). Maam-yok Yibiyung played Nanna, Clint played Old Dog, and I was delighted to revoice Little J and Ms Chen.

It took two and half days to complete the full audio record for both episodes, and a tonne of focus and energy to get it as polished as possible. We had to do some script editing on the fly when the syllable count wasn’t quite aligning with the picture, so a little bit of creative licence was necessary here and there. I am so proud to have conceived this idea and seen it through with my team. The whole process was a great learning experience on every level. Once both episodes are ready to be released, I truly hope all members of my Noongar community enjoy watching them and hearing these beautiful characters speak our language.

Thank you to everyone who helped bring this special project to fruition. I am grateful.